skip to main | skip to sidebar

In one hour I will depart to a two weeks trip to China, yet I am crazy enough to quickly tell you one more fairy tale. It is one of the most known fairy tales in Japan and inspiration for many good deeds.

A long time ago in a small village in Japan there lived a poor old man and his wife. One day, as New Year's drew near, the wife looked in her rice chest and found that there was hardly any rice left. And with the snow so deep that they could not gather the leaves needed for weaving kasa (sedge hats) to sell, there was nothing else she could do but prepare hot water for cooking what was left of the rice.

Just then, a baby mouse appeared from a hole in the wall, crying, "Oh, I'm so hungry." The mother and father mice scolded their son, "This house is so poor that there are seldom any food scraps left to eat, so you'll just have to bear with it."

"Poor baby mouse," said the old man. "We are so bad off that even the mice are hungry." Feeling sorry for them, he gave the mice a small portion of the last of their rice, which they used to make rice cakes, and together they dined.

The next morning, after eating a sparse breakfast of pickles and tea, the mice tramped out into the snow and gathered a generous pile of sedge, which they then brought back to the house. "This is in return for last night's rice." The old couple thanked the mice. If they could weave and then sell lots of hats in the town, they would be able to buy plenty of food for New Year's. So the old couple and the mice promptly got to work weaving hats. When they were finished, the old man shouldered his ware and went out in the snow toward the town.

When he reached the outskirts of the town, he noticed that the stone statues of Jizo-sama, the Buddha that protects the common people, had their heads covered with snow. "Jizo-sama," he said, "your heads look cold." The old man took the towel he wore around his own head and gently wiped the snow off each statue.

The town on New Year's Eve was bustling with people making their last minute New Year's preparations. The old man joined the throng, singing out, "Sedge hats, sedge hats. Who needs a sedge hat?" But nobody bought a hat from him. Before long, the streets grew empty and the night watch bell began to toll. The old man, having sold not even one hat, shouldered his load and trudged toward home. "I have nothing I can even offer to Jizo-sama," he thought dejectedly.

The old man made his way through the snow-filled streets and finally reached the outskirts of the town. There he noticed that snow had once again piled up on top of the heads of the Jizo-sama statues. So again he took his towel and carefully wiped the snow from each one. Then he said to the statues, "I couldn't sell even one hat for money to buy dumplings, so I have no food to offer you. I'll give you my hats instead." With that, he placed a hat upon each statue's head. But there were six statues and only five hats. The old man thought for a moment and then took the towel and placed it gently on the sixth statue's head. Now completely empty-handed, he returned home.

When he arrived home, the mice looked at his empty back and excitedly thought that he must have sold all of the hats. "Forgive me. I couldn't sell even one hat," said the old man, and then preceded to relay the day's events to his wife and the mice. The old woman, listening, solaced her husband, "That was a kind thing you did. Let's have some pickles and warm water and welcome the New Year."

Just then, in the middle of the night, they heard loud voices cry, "New Year's Delivery! New Year's Delivery! Where is the house of the old hat seller?" Amazingly, the voices came from none other than the Jizo-sama statues, who came forth pulling a sleigh loaded to the hilt with rice, miso (bean paste), and many other delicacies. "Hat seller, thank you for your hats. We leave these gifts for you in return. Have a Happy New Year." With that, the Jizo-sama statues returned to the outskirts of the town.

Since there was more food than the old couple could eat, they had the mice invite their animal friends over, and everybody prepared the food together. Then the old man stacked the boxes of special New Year's food and rice cakes that they had made and took them to the Jizo-sama statues. "Jizo-sama. Now I can make you an offering. Thank you."

The old man returned home and, together with his wife, the mice, and their friends, welcomed in a festive and happy New Year.

Very inspiring. When a man as poor as this hat maker at the border of starvation can have pity with stone statues,to what amazing things are we able! According to Nakamura-san, my trusted source for fairy tales, and my own experiences in Shikoku this little tale was inspiration for many women and men to do selfless deeds giving away things to people in need. :)
Also you can find the 地蔵 Jizou of the fairy tale in many spots in Japan, for example I found them on 宮島 Miyajima. 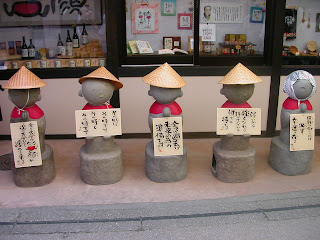